Capcom will be a part of PlayStation Experience in Las Vegas! Come by to see the latest game demos, participate in tournaments, and maybe even walk away with a free game. 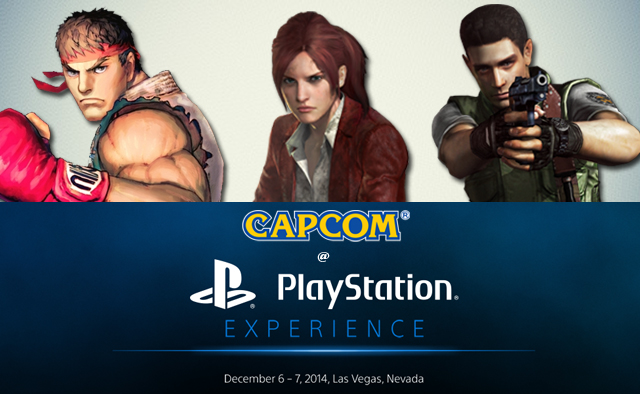 Claire Redfield and Moira Burton star in the latest chilling installment of the Resident Evil franchise. Imprisoned on a mysterious island, Claire and Moira are fighting for survival as they try to unravel the secrets of what’s really happening on this tiny island facility, but little do they know that evil is watching their every move.

The story will unfold over 4 dramatic episodes each being released on a weekly basis digitally. Pre-order the Complete Season now on PlayStation Store to get the whole story and also receive the ‘RAID Mode Throwback Stage Pack’ for free! Resident Evil Revelations 2 will be coming to PS4 and PS3 in early 2015, but you can get a first look at the game with our playable demo at PlayStation Experience.

The game that defined the survival-horror genre is back! The remastered HD version of Resident Evil will be available for download early 2015 for PS4 and PS3. This is the first time the game will be playable for the public, so come by and see the mansion in a whole new way.

Experience the action and hype of the Capcom Pro Tour! Free-to-enter Ultra Street Fighter IV tournaments will be running every day of the show, with awesome prizes for winners and entrants alike. Put your skills to the test on the specially created eSports stage, or one of the playable demo kiosks. Best of all, anyone who plays a match of USFIV, tournament or not, will get a FREE digital copy of Super Street Fighter IV Arcade Edition for PS3!

Thanks and hope to see you all December 6th and 7th in the Capcom booth at PlayStation Experience!