Alongside the release of Heists, players were given the opportunity to unlock new Adversary Modes in GTA Online to play. Adversary Modes offer a series of new challenges, both for teams working together to hunt in packs, and for aces and pairs to prove they can survive when the numbers are against them. In case you haven’t quite come to grips with these modes yet, or if you’re looking to master your technique, we’ve collected a few tips to share so that you can dominate the opposition. If you’re not yet familiar with how they work, you can read up on them a bit via our preview of each mode. 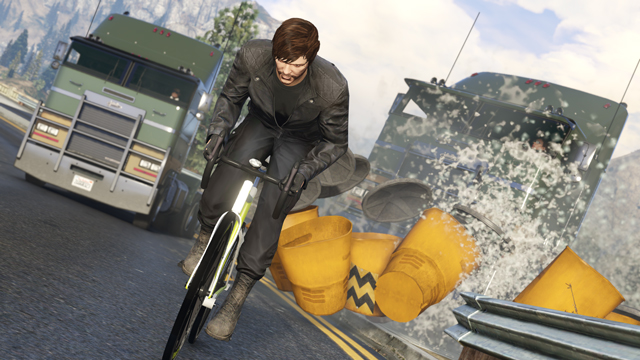 Hasta La Vista challenges two Truckers in big rig cabs to mow down two slower (but more maneuverable) Cyclists, before they reach a designated checkpoint. It’s crucial that the Truckers remember that only oneof the Cyclists need to reach the checkpoint in order for the Cyclists to win. With this in mind, Truckers are encouraged to work together to take out the Cyclist in front before focusing on the one in the rear. By doubling up you’re increasing the size of your battering ram, making it harder for Cyclists to cut a last minute swerve to get out of your way. Even if the Truckers aren’t able to turn the Cyclists into road pizza, they can also win if the timer runs out before a Cyclist reaches the finish line. Sometimes keeping a Cyclist occupied is as good a tactic as killing them to ensure victory.

Hasta La Vista offers the perfect battle between the contrasting attributes of speed and maneuverability. It’s imperative that the Cyclists use the advantages of their nimbler vehicles to the fullest – manipulating the enhanced acceleration and braking of the bicycles to dodge and avoid the heavy blows of the big rigs. Also, if you’re on two wheels, don’t forget about clicking the right analog stick of your controller to look behind you and anticipate incoming attacks. Finally, be sure to use the specific features of each map to protect yourself from incoming damage by swerving in front of the natural barriers on each route. In the Los Santos storm drain in Hasta La Vista I, the pillars supporting each bridge will help to cover you; on the routes through Blaine County you may need to use the trees and fences to assist your getaway. 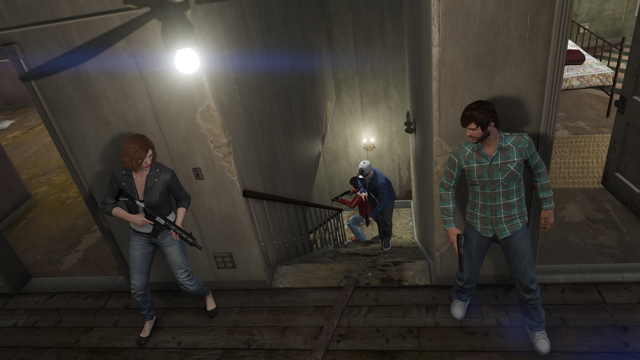 In Siege Mentality, a small group of Defenders must defend their solitary lives from waves of Attackers for a given amount of time. The Attackers will always start Siege Mentality further away from where they will respawn after being killed. This buys the Defenders a few extra seconds at the start of the Mode to anticipate routes of attack and set themselves in positions where they can create chokepoints in those areas. With two players, this opening position is critical to defense and coordination is key to covering all possible angles. In those opening moments, it can be prudent to set up booby traps with Proximity Mines and Sticky Bombs at any points that you can’t easily cover. In the case of the Sticky Bombs, hold off on hitting the trigger button until the last moment: this will ensure the maximum number of Attackers are within range of your ring of fire. Throughout the battle, make sure to speak over headsets when you spot an Attacker so that your fellow Defenders can help if you need backup. One final tip for the Defenders: sometimes an Attacker may attempt to keep you pre-occupied causing you to let your guard down for other potential Attackers. If an Attacker is too far out of reach, move on to looking for others to defend against.

In Siege Mentality, Attackers will often vastly outnumber the Defenders. They must capitalize on this advantage by making sure that they keep the pace high and attacks relentless. Camping out and waiting for a moment to strike will only allow Defenders to reposition and reload; you have to be prepared to die in your quest to get close enough to blast them away. At the start of the Job, it may be worth coordinating positions so that Defenders are surrounded. This will make it harder for them to use cover and keep their backs to the wall. Don’t make it easy on them by attacking from the same point. 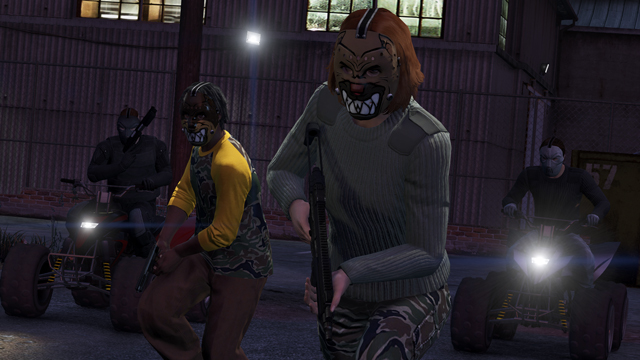 Come Out To Play

Come Out To Play is a game mode that combines elements of both Hasta La Vista and Siege Mentality, and thus players can draw on experiences in those two game modes to ensure victory. Like the Cyclists in Hasta la Vista, Runners have more options for maneuverability around the map. In particular they are able to scale walls and traverse rooftops in ways that the Hunters (locked to their vehicles) cannot. Escaping over a wall or up a stairway can put you out of range of the Hunters’ sawn-off shotguns and buy you time to turn and pick them off with one of your more advanced weapons. Just as the Defenders in Siege Mentality are advised to cover each other, Runners should work together to cover attacks coming from all sides. In particular, be sure to move across open ground as one unit. Face opposite directions to ensure that there are no surprises. Co-ordination via headset will be crucial for this. Once you’re on the finishing straight, you may be required to cross a significant stretch of open ground. At this point your advantage of being on foot is limited. However, only one Runner has to reach the final flare, so their partner can stay behind and camp out to protect their teammate making a dash for the finish.

For the Hunters, dividing and conquering is the key to victory. Runners will look to stick together for safety – if you can split them up and focus your attacks on one Runner, you are better able to distract and surround them. To help coordinate this, remember that Runners can’t see you on the HUD until you’re within hearing range. By contrast, you’ll be able to see their position at all times. Knowledge is power, so use this to move to either side of them and attack at the same time. Choose when to attack carefully; Runners are most vulnerable when they expose themselves crossing open ground – so anticipate their movement and pick your spots. Knocking players over is a crude but effective tactic: as they sprawl on the ground from the first hit, have a second player take advantage of their recovery time to get up close and line-up a finishing blow. Finally, Hunters shouldn’t forget that they can turn off their headlights with the right D-Pad button in order to sneak up on the Runners in the dark more easily.

Keep an eye for an announcements about forthcoming Twitch live streams featuring these Adversary Modes. We’ll also be tweeting out opportunities to join those streams so please do follow us on theRockstar Games Twitter feed to find out how to play in our stream lobby. And we know that many of you have been asking for tips on the Heists themselves, but since they are a unique challenge in GTA Online we don’t want to spoil any elements for those who may not have played them yet. However, if you have some tips to share or stories about a tactic you’ve discovered while playing please feel free to share in the comments below.

Video Games Top The Lists Of Holiday Gifts According To New U.S. Survey