Arriving today for Forza Motorsport 6, the Turn 10 Select Car Pack features one of the most diverse collections of cars ever seen in Forza history, with each vehicle hand-picked by the team at Turn 10. Whether you’re a fan of four-wheeled European eccentricities, or you want to experience one of the largest race vehicles in the world, this crop of amazing cars offers something for everyone.

Take a trip back in history in the diminutive BMW Isetta, or relive history in the 1969 Indy 500 winner. If you agree that “bigger is better” then you can experience the first European race truck to come to Forza Motorsport 6. Beyond that, this pack offers a bespoke race car, the latest McLaren masterpiece, an Italian classic worthy of some top-down track time, and some American competition for WTCC racing.

Available to download collectively for $7 or for individual purchase, these seven cars are ready to join your Forza garage and let you start making history with them. See below for the full list of cars coming in the Turn 10 Select Car Pack, as well as some special comments about each of the car from the experts at Turn 10. 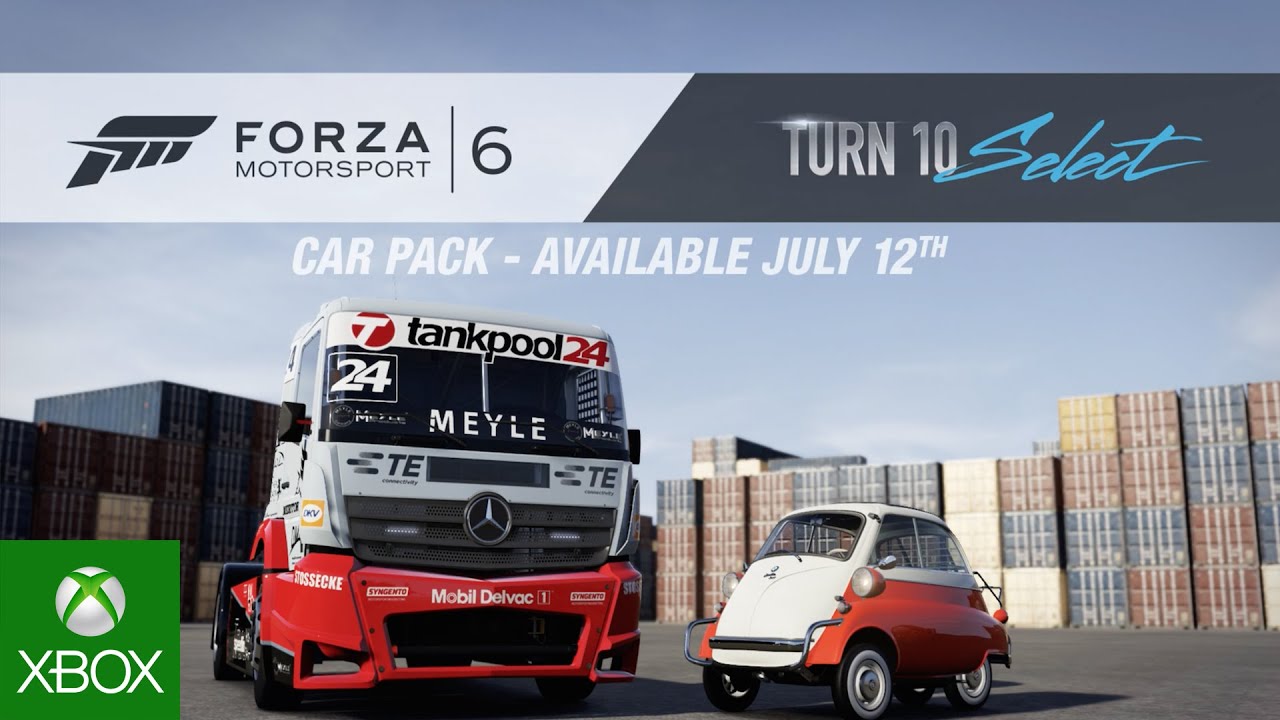 2014 Jaguar #14 Emil Frey GT3 Jaguar XK
Doing things the hard way is the course for the Emil Frey GT3 Jaguar team. The Frey family history is closely tied with Jaguar going back to before they made cars. That history drove descendent Lorenz Frey and partner Fredy Barth to go with a Jaguar chassis. Beyond that bit of aluminum, the car is almost entirely bespoke. The team designed everything from the gearbox to the steering wheel and iterated again and again to be competitive in the Blancplain Pro-Am Cup division. They are the David to the factory works Goliath teams. The car has proven to be competitive and winning against the industry giants is their sole goal.

“The relationship between Emil Frey Racing and Jaguar goes back decades. So it only makes sense that, with a new lease on life, this Swiss team set out to reintroduce Jaguar to world of GT racing. Building this XK from the ground up. Determined to do things differently. And with only one goal in mind: Winning.” – Jeff Gaeta, Vehicle Polish Senior Artist

2015 Mercedes-Benz #24 Tankpool24 Racing Truck
This isn’t your uncle’s semi-truck, it’s a European Racing Truck. This 1,080-horsepower beast races among its competitor brands on the tracks of Europe, including a climactic event at the Nürburgring Grand Prix circuit. The Tankpool 24 Hours Racing Team is headed up by truck racing legend Markus Oestereich. “Oese,” as he is referred to in the paddock, has been mentoring drivers Andre Kursim and Norbert Kiss to drive the 24 in the nine rounds of this incredible series. Climb aboard this colossal racing machine, engage first gear, and get ready for the ride of your life.

“I remember visiting Europe a few years ago and happening upon a replay of a European Truck Race on television. It was like nothing I’d ever seen, with these massive behemoths lumbering around the track and fighting for position. My first thought was ‘How cool would it be to race these in Forza?’ The Tankpool24 may not be what most people think of when they think of ‘racing’ but as soon as you sit in that cockpit high above the tarmac and rev that engine,  you’ll know exactly why an ETRC truck belongs in Forza 6.” – Brian Ekberg, Community Manager

2014 Chevrolet #4 ROAL Motorsport RML Cruze TC1 WTCC
ROAL Motorsport was founded by former driver and multiple touring car series champion Roberto Ravaglia. The World Touring Car Championship is sanctioned by the FIA and began in 1987. After a few breaks, it has been running every year since 2005. Since 2010, Chevy had seen much success as constructor, winning the championship four years in a row. In 2014 ROAL switched to the consistently winning Cruze when BMW bowed out of touring car competition. With drivers Tom Coronel and Tom Chilton, the team saw victory in both China and Hungary.

“WTCC is one of the greatest race series in the world and no car could represent it better than the Chevy Cruze. Even though it could be seen as your typical American car, it actually represents a truly global combined effort. From the engineering of the platform to the manufacturing of the many components, there are multiple countries involved in its development, including the United States, Germany, Australia, Russia and Brazil, to name a few.” – Leonardo Lopez-Mobilia, Vehicle Production Senior Artist

1980 Fiat 124 Sport Spider
The Fiat 124 Sport Spider brought an affordable option to the road in Europe and America, and was largely unchanged, for nearly 20 years. In 1980 it had a fuel-injected 2.0-liter motor to motivate the sleek lines of its Pininfarina body. Over the course of its production run, more than 200,000 models were sold, with around 75 percent sold in the United States.

“Long before Fiat merged Italian design with a fourth-gen Mazda Miata, there was the original Fiat 124 Spider. The sporty convertible was designed by world-renown coachbuilder Pininfarina, and ran a four-cylinder engine built by ex-Ferrari chief engineer Auerlio Lampredi. Fitted with a solid roof and homologated for Group 4 rally by Italian tuning house Abarth, the 124 saw good success in the World Rally Championship between 1971 and 1975.” – Scott Catlin, Senior Designer

2015 McLaren 570S Coupé
It might be slotted below McLaren’s extravagant P1 and 650S, but there’s nothing entry-level about the 570S. This masterpiece of McLaren expertise instead targets a different segment of clientele and does so with astounding results. Taking cues from the P1’s front end, the 570S is smart not only in looks but also how the air passes over every bit of its flowing body curves. Behind the luxurious and functional cockpit is a twin-turbo 3.8-liter V8 that delivers an exhaust note that is almost as glorious as the feeling of the car’s ungodly acceleration. The 570S is a car whose beauty is only surpassed by its performance.

“The 570S is the latest sports car to come out of the McLaren Technology Center. As the little brother to the P1’s little brother (aka the 650S), the 570S exudes all the precision and passion that fans have to expect. While the current F1 season might be a struggle for McLaren fans, you will certainly have a chance to win with this car.” – Julian Mosely, Vehicle Senior Artist

1969 Ford Brawner Hawk III
The Brawner Hawk III was nearly left by the wayside before having a chance to shine, thanks to the four-wheel-drive Ford-powered Lotus of Colin Chapman in the 1969 Indy 500. Fortunately for Clint Brawner who developed the Hawk III, the Lotus failed, causing driver Mario Andretti to crash and the Lotus to be withdrawn. Brawner had the Hawk III ready, with its sturdy chassis and improved Ford turbo-V8. With Andretti behind the wheel, the red STP-liveried Hawk III qualified second, just behind A.J. Foyt. Andretti took the lead after the green flag fell, and while he had to run slower to maintain engine temperatures, the Hawk III outlived both Foyt’s Coyote/Ford and Wally Dallenbach’s Eagle/Offenhauser. Andretti would win the 1969 Indianapolis 500, two full laps ahead of second place Dan Gurney, marking his first and only Indy 500 win.

“When Mario Andretti’s primary car broke in pre-race of the 1969 Indianapolis 500, he moved to this Ford-powered #2 STP Hawk, which the team affectionately called the “Cinderella car.” Andretti went on to win in convincing fashion, leading 116 of the 200 laps. Visually this car is stunning, from its asymmetrical wing configuration, externally routed radiator tubing and almost military-grade construction. Among my favorite details are the outboard intake/inboard exhaust ports. This really makes a showcase of the no-nonsense beauty of the exhaust headers feeding the turbo perched neatly behind the triple air foils. Everything about this car is straight to the point and in your face.” – Gabe Garcia, Vehicle Art Director

1957 BMW Isetta 300 Export
The Isetta is an Italian microcar that was manufactured by several companies in different countries. The BMW Isetta 300 was the most successful, possibly due to BMW almost completely re-engineering the tiny “bubble-car.” BMW used its own single-cylinder, four-stroke 298cc engine that made all of 13 horsepower. However, it was enough to propel two adults and their luggage at speeds up to 53 mph. What makes the Export model unique are the U.S.-spec nerf bumpers and headlamps. Open the single-door on the front – the steering wheel conveniently moves to the side to allow easier entrance and egress – and go for a spin in one of the most unique rides to ever appear in Forza Motorsport.

“Character. Soul. Fun. It’s rare to see mass-produced cars from today’s era that can claim to have any of those characteristics. But the 1957 BMW Isetta 300 Export has all three in spades. Compact and cozy, this was a simple yet effective way for people to get from A to B in stylish Italian design with German engineering. I remember seeing this in the BMW Museum, and I couldn’t help but smile. We hope it brings a smile to you too!” – Will Lee, Senior Producer

July Content Update
In addition to the Turn 10 Select Car Pack, we have released the latest content update for Forza Motorsport 6. The focus of this content update has been on bringing three tracks in Forza Motorsport 6 back into competitive play – Monza, Catalunya, and Circuit of the Americas. The team at Turn 10 has worked to address numerous issues on all three of these tracks. For example, at Monza, the chicane at Turn 4 has been adjusted to more accurately distinguish between clean and dirty driving lines. Also, the tirewall at Turn 4 has been moved to alter the driving line and better prevent corner cutting.

The Simpsons Coming Soon To Minecraft On Xbox

XBox One Designer And XBox Live Founder Departs From Microsoft